The rule and question of the eggs.

A young maiden beareth eggs to the market for to sell and her meetheth a young man that would play with her in so much that he overthroweth and breaketh the eggs every one, and will not pay for them. The maid doth him to be called afore the judge. The judge condemneth him to pay for the eggs/ but the judge knoweth not how many eggs there were. And that he demandeth of the maid/ she answereth that she is but young, and cannot well count.[1]

“The rule and question of the eggs” is an arithmetic problem contained within the earliest English-language printed treatise on arithmetic, An Introduction for to Learn to Reckon with the Pen.[2] In addition to being flat-out joyous to read, “The rule and question of the eggs” (along with the other examples Travis D. William’s discusses in his brilliant essay on early modern arithmetic in ‘Raw Data’ is an Oxymoron) raises some important issues that are relevant on a multidisciplinary level in terms of how we approach the archives of our respective fields of study with a view to making them available on digital platforms; furthermore, the “rule and question of the eggs” raises interesting questions in terms of how nuanced cultural artefacts (of which this is but one example) are to be satisfactorily yolked together (see what I did there?) and represented en masse in the form of big data.

It is not easy to define what facets of this piece of hella dodgy arithmetic merit particular attention, or to anticipate what facets of the piece other readers (present day or future readers) may find interesting. If we were to go about entering this into an online archive or database, what keywords would we use? What aspects of this problem are of particular importance? What information is essential, what is inessential? For practitioners of maths, is it the bizarre non-existent non-workable formula that seemingly asks the student to figure out how many eggs the girl was carrying in her basket, despite the volume of the basket being left out and the girl herself professing to not knowing how to count? For historians of mathematics and early modern approaches to the pedagogy of mathematics is it the language used to frame the problem? For sociologists, feminists, or historians (etc.) is it the unsettling reference to a “young man that would play with” a young woman? Is it the fact that the crime being reported is the destruction of eggs as opposed to the public assault? Or is it the fact that the young girl seemingly countered his unwelcome advances by committing fraud because she claimed she had been carrying 721 (!) eggs.[3] Simply put, where or what is the data here? And is the data you pull from this piece the same as the data I pull from it, or the same as the data a reader in fifty years time will pull from it?

Houston, we have a problem: if we go to categorise this example, we risk leaving out any one of the many essential facets that make the “rule and question of the eggs” such a rich historical document. But categorise it we must. And, just like moving between languages (English-to-French or vice versa), when we move from rich, nuanced, ambiguous and complex linguistic narratives to the language of the database, the dataset, the encoded set of assigned unambiguous values readable to computers, we expose the material to a translation act that imposes delimiting interpretations on that material by creating datasets that drastically simplify the material. Someone decides what is worth translating, what is incidental, and what should be left out here. Someone converts the information as it stands in one language (linguistic narrative), into supposedly comparable or equivalent information in another language (computer narrative).

Further still, by translating this early modern piece into information that is workable within the sphere of contemporaneous digital archival practices, we create a scenario wherein the material is no longer read as it was intended to be read. We impose our thinking and understanding about maths (or women’s rights, say, because the “play with” part really irks me) onto their text by taking it and making of it a series of functional datasets relevant to our particular scholarly interests. As Williams points out “a data set is already interpreted by the fact that is a set: some elements are privileged by inclusion; while others are denied relevance through exclusion.”[4]

In analysing these pieces Williams establishes four terminologies: “our reading and their reading, our rigor and their rigor.”[5] He elaborates:

Our reading is a practice of interpretation that seeks to understand the appearance and function of texts within their original historical and cultural milieus. Our reading thus incorporates the need to understand with nuance their reading: why and how contemporaneous readers would read the texts produced by their cultures.[6]

When we amp up the scale to the realm of big data and this one tiny problem becomes one tiny problem within an entire ur-library of information, how do we stay cognisant of the fact that every entry in a given dataset, no matter how seemingly incidental or minute, could be as detailed and nuanced as our enigmatic rule and question of the eggs?

[2] In am indebted to Travis D. Williams’s essay “Procrustean Marxism and Subjective Rigor: Early Modern Arithmetic and Its Readers” (to be found in “Raw Data” is an Oxymoron (2013)) for bringing these incredible examples to light.

[3] Williams notes that the “correct” answer (or rather the answer recorded in the arithmetic book as the “correct” answer) is 721 eggs. But this would mean that the young maiden carrying roughly 36 kilos (yes, I’ve done the math) of egg, which seems unlikely. Williams “Procrustean Marxism and Subjective Rigor,” ibid.

Featured image was taken from http://www.flickr.com 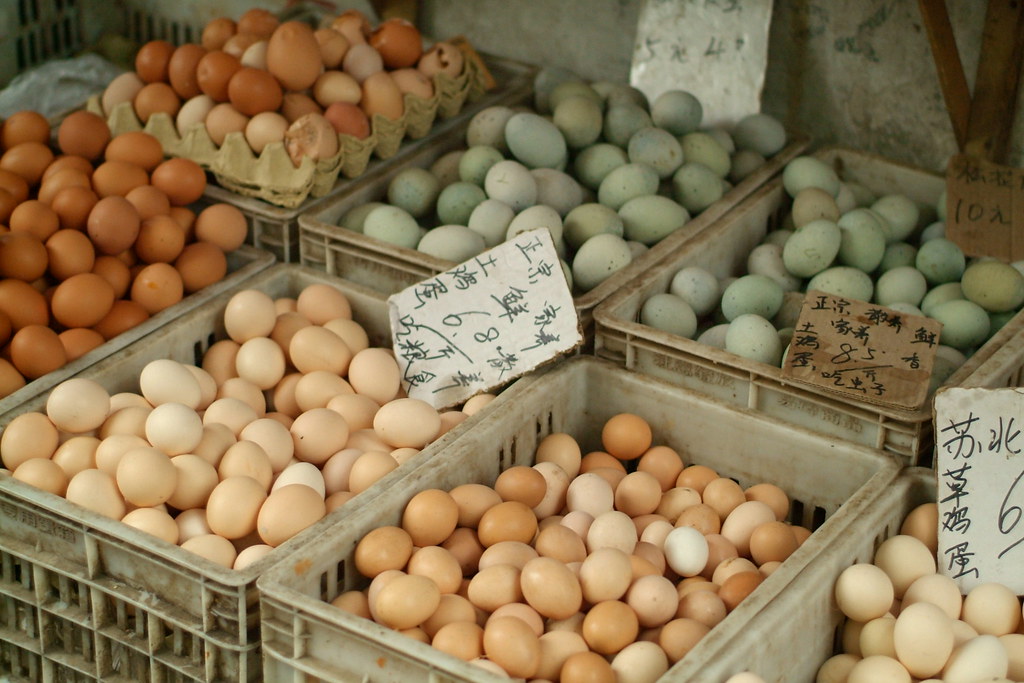 2 thoughts on “The rule and question of the eggs: how do we decide what data is the right data?”