“It’s a beautiful thing, the destruction of words.”—George Orwell, 1984.

One of my earliest memories of being reprimanded happened when I was in Junior or Senior Infants at Primary School. During a French lesson I needed to use the bathroom (tiny humans often do). We had been told we could only communicate in French, so I sat there attempting to gather and translate my toilet related thoughts into something suitably Francophone. Eventually I put up my hand, got the teacher’s attention, pointed at my chest and said “Moi,” pointed at the door that lead to the bathrooms and said “toilette?” The teacher snapped and said “No Georgina you are not a toilet!”

A little harsh perhaps, especially considering I was a four-year old three-foot high mini-human, but still, I haven’t forgotten it, and now I’m fluent in French. My effort at breaking down a language barrier caused someone to snap and (it seems) be insulted by my tiny human attempt at French.

So certainly I agree with Jennifer’s point from her recent blog article here that “Building intimacy (for this is what I take the phrase “brings you closer” to mean) is not about having a rough idea of what someone is saying, it is about understanding the nuance of every gesture, every reference and resonance.” This is part of the (many) reason(s) why people on the autism spectrum, for example, find social interaction so difficult, because of a difficulty understanding these very gestural nuances that are so central to human communications. And this lack of understanding often brings with it frustration, isolation, loneliness, and pain. The point is: it’s not just about the words; it’s about how they are said, the tone, the gesture, the contexts. These are things a translation program cannot understand or impart, and it is arrogant to suggest that such facets of communication are by-passable or expendable when so many people struggle with them on a day-to-day basis. Moreover, they are facets of human communication that cannot be erased or eliminated from speech-exchanges with a view to making these exchanges “simpler” or “doubleplusgood.” That brings us right into 1984 territory. 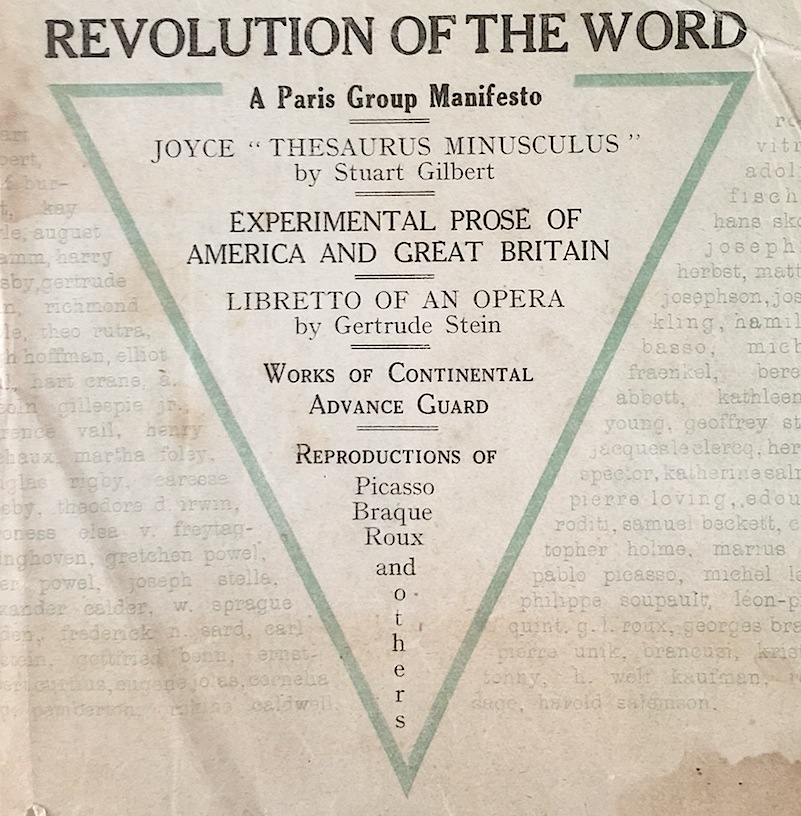 From the perspective of Eugene Jolas, author of the “Revolution of the Word” manifesto published in transition magazine, a modernist periodical active in Paris throughout the 1920s and 1930s whose contributors included the likes of James Joyce, Gertrude Stein,  and Samuel Beckett, language was not complex enough:

Tired of the spectacle of short stories, novels, poems and plays still under the hegemony of the banal word, monotonous syntax, static psychology, descriptive naturalism, and desirous of crystallizing a viewpoint… Narrative is not mere anecdote, but the projection of a metamorphosis of reality” and that “The literary creator has the right to disintegrate the primal matter of words imposed on him by textbooks and dictionaries.”[1]

So, language, or rather languages (Jolas was fluent in several and often wrote in an amalgamation that, he felt, better reflected his hybridic Franco-German (Alsatian) and American identity[2]), was not complex enough to fully express the totality of reality.

Mark Zuckerburg proposes something of a devolution, a de-creation, a simplifying of difference, a reintegration and amalgamation of the facets that distinguish us from others. But while it might appear useful (Esperanto, anyone?), is the experience going to lead to richer conversations? To a demolition of barriers? Or will it result in something akin to Point It, the highly successful so-called “Travellers Language Kit” that contains no language at all, but rather an assortment of pictures that allow one to leaf through the book and point at the item you want.

After my childhood French toilet incident, I myself could never overcome the mortification involved in using Point It. But even if I did, would the success of an exchange wherein “Me *points at* Coca-Cola” results in my being handed a Coca-Cola give me the same satisfaction as my first successful exchange with someone in another language did? The first time I managed to say something in French to a French person in France and be met with a response in French as opposed to a confused look or (worse) a response in English. Would Zuckerberg’s own much-lauded trip to China in 2014 where he was interviewed and responded in Mandarin have received as much positive press if he had worked through an interpreter, or used a pioneering neural network translation platform? I don’t think so.

Reducing or eliminating language difference also creates hierarchies, and this is dangerous. What language will we agree to communicate in? Why one language and not another? What facets of my individuality are accented in my native language that are perhaps left out or lost in another?

In short, there is an ethical element to this, and one that must be acknowledged and addressed. It’s similar to the argument Todd Presner articulates in “The Ethics of the Algorithm” when he notes the negative affect of reducing human experience (in this case, the testimonies of Holocaust survisors) to keywords so that their experiences become “searchable”: “it abstracts and reduces the human complexity of the victims’ lives to quantized units and structured data. In a word, it appears to be de-humanizing”[3]

We have to resist what Presner calls “the impulse to quantify, modularize, distantiate, technify, and bureaucratize the subjective individuality of human experience,”[4] even if this impulse is driven by a desire to facilitate communications across perceived borders. Finding, maintaining, and celebrating the individual in an era that is putting increasing pressure to separate the “in-” from the “-dividual” for the sake of facility will lead (and has perhaps already lead, if we can refer back to Don DeLillo’s 1985 observation that “You are the sum total of your data.”) to the era of the “dividua”[5]; where instead of championing individuality, people are reduced to their component data sets, or rather the facets of their personhood that can be assigned to data sets, with the rest—the enigmatic “in-” that makes up an individual—deemed unnecessary, a “barrier” to facile communications.

Rather that working to fractalise language, as Eugene Jolas did, universal translation (which is itself a misnomer, all translations are, to a degree, inexact and entail a degree of intuition or creativity to render one word in or through another word) simplifies that which cannot, and should not, be simplified.  This would be doubleplusungood.

[2] Born in the New Jersey, Jolas moved to Europe the bilingual Alsace-Lorraine region as a young child, and later spent key formative years in the United States.

[3] Presner, in “The Ethics of the Algorithm: Close and Distant Listening to the Shoah Foundation Visual History Archive” in Fogu, Claudio, Kansteiner, Wulf, and Presner, Todd, Probing the Ethics of Holocaust Culture..

[5] Deleuze, “Postscript on the Societies of Control.”

One thought on “The Revolution of the McWord; or, why difference and complexity is necessary.”